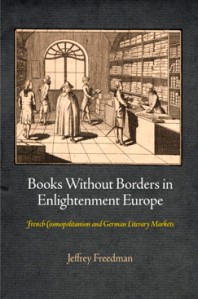 Jeffrey Freedman’s engaging Books without borders in Enlightenment Europe (2012) looks at the French book trade in the German-speaking territories during a pivotal period in the European history of ideas. This French book trade did not just cater for a small elite of princes and courtiers, it was absorbed by a variety of well-educated German speakers from scholars to doctors and lawyers and a variety of other professionals and thus played an important role in spreading and popularising the Enlightenment. By the 1770s, the French segment accounted for some ten per cent of all books sold on the German market.

Among the works sold by the German agents of French-language printers and booksellers were also many unlicensed and prohibited books. But thanks to the political fragmentation and the many administrative quirks of the German lands, censorship laws were virtually unenforceable, so that heterodox and libertine works could reach their readers relatively easily. The ban of a work often only served to make it more popular and more desirable to ‘procure the forbidden pleasure’ (118) as no one less than the German author Johann Wolfgang von Goethe remarked recalling the burning of a French book in his native Frankfurt.

Books without borders feels in many ways like a sequel to Robert Darnton’s seminal Business of Enlightenment (1979), not just because Freedman draws on the same depository of sources of the Swiss Société Typographique de Neuchâtel (STN), which here represents ‘a slice of the French book trade in Germany’ (11) but also because he, like Darnton (who was his PhD supervisor at Princeton), offers the reader a carefully researched and well-informed book history intermixed with numerous little personal stories of the STN’s correspondents in the German lands, zooming in and out of the bigger picture.

Some of these personal stories are quite detailed, and readers might be inclined to skim read them. But this would mean to miss the colourful picture Freedman paints of the lives, successes and struggles of eighteenth-century printers and their agents. Occasionally, we even get a rare glimpse of their political inclinations and the convictions that might have driven the latter to get involved in the business of books.

There is, for instance, the ‘native Parisian and Freemason’ François Mettra, who had his shop in Münz, near Cologne, and moonlighted as a ‘radical journalist’ (63); or Charles Fontaine in Mannheim, the semi-educated ‘son of a fisherman’ who is unlikely to ‘have read many of the books in his own bookshop’ (75); and finally Johann Conrad Deinet in Frankfurt, who ended up as the Empire’s book commissioner (or chief censor) despite having had various run-ins with the authorities himself for dealing in prohibited books. But as Freedman points out, ‘it would be a mistake to assume that in the eighteenth century, censors and booksellers were always on opposite sides of the ideological barricades and that if booksellers obeyed the law, it was only because they feared the consequences of transgressing it.’ (110) Many exercised a certain amount of self-censorship too, selling prohibited material, but drawing the line, say, at ‘atheism and pornography’. (110)

While French-language works were en vogue among the educated classes in Germany, however, only few German works were translated into French, and those that were often had to undergo a long process of interventions.

In an interesting digression into the psychology and practice of translation, Freedman shows that the key to a successful translation, especially from German into French, was in overcoming ‘foreignness’ (187). To ‘please the French’ who were ‘easily offended by linguistic missteps’ a work had to follow the right sort of ‘style’ (188). In other words: ‘Most French translators in the eighteenth century believed … that the goal of translation was to domesticate foreign works, to make them, as it were, at home in France, so that they would read almost as if composed originally in French.’ (195) And if that did not help, other tricks had to be employed to make a work sell.

For instance, the French translation of Friedrich Nicolai’s novel Sebaldus Nothanker (1774) received a new title page in 1776, suggesting it was a roman philosophique – ‘an anti-religious book of the kind the authorities would be likely to confiscate’ – to raise its appeal to the reading public (213).

Some agents, however, did not only sell incendiary books, they turned revolutionaries themselves. The STN’s Hamburg correspondent Jean-Guillaume Virchaux, for instance, defected to revolutionary Paris after suffering bankruptcy and a failed journey across Europe to recover money from his debtors. Imprisoned after a republican demonstration on the Champ de Mars in July 1791 he ended his public life as a Jacobin defending revolutionary war.

Freedman’s book is at its most interesting when these real-life stories of Enlightenment agents are related back to the bigger picture, giving the reader an idea of how this major transnational intellectual movement was shaped by the people on the ground. However, Freedman is primarily a book historian, not a historian of ideas. So these connections are suggested rather than followed through, and it would be most interesting to see what a historian of ideas might find picking up Freedman’s story at the other end.

Books without borders is an important work that takes a transnational approach to a subject too often studied within narrow and largely artificial national boundaries. It deserves to be read widely and will hopefully inspire other historians of the book to explore similar paths.

* Of course ‘Germany’ is a somewhat slippery shorthand for the German-speaking areas of Europe. gm