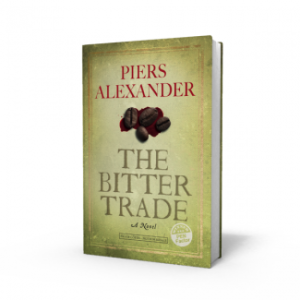 The Bitter Trade by Piers Alexander is a historical novel set in the murky world of London’s coffee houses on the eve of the Glorious Revolution. The son of an English dissenter and a French Huguenot, its young redhead hero Calumny Spinks lives under the shadow of his father’s dark secret dating back to Oliver Cromwell’s time which takes his mother’s life and traps him in the poverty of the weaving milieu.

Yet, he is determined to escape his fate and make his way in the world in the newly emerging coffee trade, which is at times only fractionally above board. Along the way, he meets crooks and wise men and a range of strong women, who teach him a thing or two about life and love, and that hardly anyone is who they appear to be at first sight.

Torn between the scheming daughter of a wealthy coffee trader, a popish seamstress and the waitress of a coffee house, who all carry their own secrets, Calumny stumbles from one adventure to the next as he uses his wit and ability to imitate voices to climb up the social ladder.

Calumny Spinks, telling name and all, is an old-fashioned hero, his first-person narrative of the chancer in dire straits reminding the reader of the picaresque novel of the seventeenth and eighteenth century. Yet, Alexander wears his history lightly.

While the setting of his novel is early modern and the legacy of the English Civil War and religious divisions loom large, he does not lecture us about detail. In fact, the novel’s postscript frankly admits to historical inaccuracies without which the tale would not be complete as it takes us back to the common folk of the London trade guilds anticipating the new freedom arriving with the Dutch King from across the sea.

Alexander’s novel is a bit of a page-turner, reading at times more like a whodunit than a historical novel as the author reveals its secrets slowly and every chapter takes us closer to the protagonist’s truth.

At times there are too many characters populating the pages, and it can be hard to keep track of the plot if you don’t have time to read the whole novel in one go. But behind the poverty, extortion and murder there is a mischievous lightheartedness in Calumny’s tall stories that keep you going to the end and still leave you wondering what might be happening next.