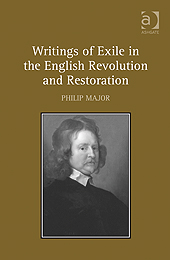 Despite the plethora of literature that has been published on the English Revolution and Restoration over the years, the topic of exile during this most exciting period of British history remains an understudied area. There is still much unseen primary source material to be uncovered in European and North American archives and plenty of gaps in knowledge to be filled. With Writings of Exile in the English Revolution and Restoration Philip Major has taken the plunge and produced a fascinating yet somewhat disjointed book.

Tackling Edward Hyde as the ‘Case Study of a Royalist Exile’ the first chapter engages with ‘many of the key corollaries of dislocation and dispossession with which royalist exiles are habitually preoccupied’, including ‘the loss and reassertion of identity; displays of stoicism, patriotism, friendship and nostalgia’ and the ‘intense debate on the discernment of divine providence’. These are accessed through ‘a close reading of Hyde’s Contemplations and Reflections on the Psalms of David’ (27) begun during his first exile on Scilly, Jersey and elsewhere during the 1640s and 50s and completed during his second exile in Montpellier in the late 1660s and 70s.

Chapter 2 on ‘Ceremony and Grief in the Royalist Exile’ explores the reaction of royalists ‘to the death of fellow exiles, as well as friends and family left behind in England’ (67). Major highlights the extent to which the use of the Book of Common Prayer in burial rituals as well as other Episcopalian traditions gave displaced royalists a shared sense of identity, while deaths within the exile community also enhanced Prince Charles’s public role and helped to revive the patriarchal image of King Charles I, which after the regicide was transferred to his son.

Chapter 3 deals with ‘Royalist Internal Exile’, primarily focusing on the banishment of royalists from London and their confinement to the countryside where focus on friendship networks and shared value systems and traditions resonated with issues pertinent to external exiles.

In his final chapter, Major then turns to the regicide ‘William Goffe in New England’ after the Restoration, showing that some of the key themes of exile such as ‘the choice of the place of refuge; the symbolism of the journey into exile; the critical importance of correspondence; the influential, sustaining role of Christian … belief; … and the attitudes of the exile towards the homeland from which he has been displaced’ (139) were similar to those we find in Hyde. Intriguingly, Major also observes that we find parallels between Goffe’s and Hyde’s use of the Psalms and other Biblical texts in their exile writings revealing their shared Protestant experience.

Overall, there are three chapters on royalists on the Continent and one chapter on a regicide in New England. Yet, this rather tentative juxtaposition of royalists and parliamentarians seems somewhat of a missed opportunity. While Major indicates that there was a continuity of the exile experience across the ‘arbitrary cut-off point’ (139) of 1660 and suggests connections between ‘the educated elite of parliament’ and ‘exiled royalists through networks of friendship and family, and shared cultural codes’ (136), he does not explore these connections in any depth. Yet, there is bound to be more where this insight came from, and the republican exiles in Europe are not to be dismissed.

There are intriguing links between Clarendon and his protégé republican Henry Neville exiled to Italy in 1664 for their mutual benefit, for instance, while the firebrand Algernon Sidney made various overtures for office to the Restoration regime before plotting to topple it. Further leads worth exploring point to Catholic Rome, where both royalists and republicans had their own secret networks, and towards the Huguenot south of France, where in the later 1660s we find both the fallen first minister Hyde and the fallen republican Sidney.

These unexplored connections raise the question if there was either a ‘continuation of war … by other means’ (155) between English republicans underground/ abroad and the Restoration regime, as Major suggests, or if it might rather be worth looking for entirely different forms of conflict and negotiated arrangements. I have been wondering for a while if we have been paying too little attention to the possibility that some well-known seventeenth-century figures might have been patriotic Englishmen first and royalists and republicans second.

Thus, moving into a newish and still only patchily explored field, Major has posed many important questions, successfully answered some, but also left enough for the rest of us to puzzle over.

Philip Major, Writings of Exile in the English Revolution and Restoration (Farnham: Ashgate, 2013).